Refer to the exhibit. A problem with network connectivity has been observed. It is suspected that the cable connected to switch port Fa0/1 on SwitchD is disconnected. What would be an effect of this cable being disconnected? 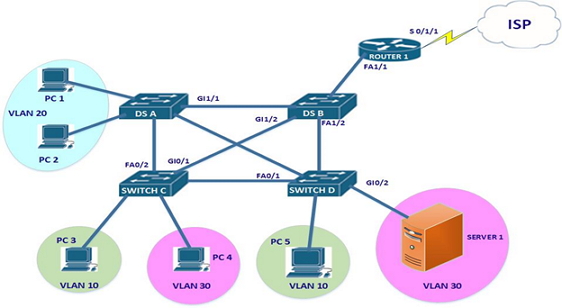 In the sample question above, you have to really understand how switching works, the impacts that one switch can have on another and what happens when an entire network reconverges in a sense after a Fast Ethernet link bounces between switches.  This is where an understanding of STP (Spanning Tree Protocol) comes into play.  Furthermore, Cisco loves to give you really complex topologies like the one we created above to just overwhelm you on the exam.  This is where taking a systematic approach to the switching question will help you ace your certification exam.  So let’s take a minute to review the possible answers and then dig through the theory to determine the correct answer.

Spanning Tree Protocol (STP) is a loop prevention in a redundant switched network by ensuring that there is only one logical path between all destinations on the network by intentionally blocking redundant paths that could cause a loop. The switch sends BPDUs (Bridge Protocol Data Units) out every active port once every 2 seconds so as to find a redundant link. Redundant links are found when the switch receives its own BPDU. When a switch discovers a link is down, a redundant link or a blocked link that is available to that network is unblocked and traffic resumes to normal.

In this scenario, STP would unblock redundant links and the affected VLANs would resume normal functionality.

Answer A is incorrect as there are redundant paths for PC 1 to reach VLAN 30 and it is more than likely the direct connection from DS A to Switch D.  So this answer is incorrect as at worst case, an alternate path can be realized.

Answer B is incorrect as again there are multiple paths that can be utilized from VLAN 30 to the other VLANs so this answer does not really make any sense.

The speed would not be reduced and there is really nothing that could definitively prove that as suggested by answer D which is incorrect.

So that leaves us with the correct answer being C.  PC 3’s most direct path is from Switch C to Switch D.  If that link was to go down, while convergence happened, an alternate path would be realized in about a minute and then network communication between PC 3 and the server in VLAN30.

So is this a bit confusing and you think you could really understand this better with your own CCENT/CCNA lab?   Check out some of the CCNA Lab Kits that are here so you can really see how this works by recreating topologies like this in your very own home lab!