The name Distance Vector means that the routes that are advertised by these routing protocols are usually sent as vectors of direction and distance.

If we were to use an analogy of a tourist in a foreign land, distance vector protocols would be described as road signs that only state the direction and the distance to get to a particular destination. They do not give any inclination as to the whole country. The tourist only knows of another point once they get to the point they were directed to by another road sign.

In this same way, distance vector routing protocols only say the next hop or the direction to a destination and the metric or the distance to get there.

A router using a distance vector routing protocol does not have the knowledge of the entire path to a destination network. Instead the router knows only:

There are several characteristics inherent with distance vector routing protocols.

Like all other routing protocols, the use of an algorithm is usually to determine the best path. The routing update usually defines mechanisms for:

When the routers configured with the same routing protocol boot up, the following happens before communication can happen between hosts.

The concepts behind the distance vector routing protocols are crucial to understanding routing using EIGRP. In the next section we will begin our discussion on EIGRP.

Some of the most notable features of EIGRP include the following.

The DUAL algorithm is the engine that is used by EIGRP in path determination and maintaining updated routes. This is unlike other distance vector routing protocols which use the Bellman-Ford algorithm. When a change is detected in an EIGRP routing domain, the routers exchange several messages to establish redundant links or to update accordingly. The updates in EIGRP are usually partial and bounded, this means that if a route goes down, the router will only notify affected routers of the missing route and it will only notify them of the missing route.

The routing updates that are sent using EIGRP are vectors of distance and are only transmitted to the directly connected and affected neighboring routers in the routing domain.

The operation of EIGRP is not limited to the IP protocol, EIGRP can route for different network layer protocols such as IP, IPX and apple talk. This support is made possible through the use of (PDMs) Protocol-Dependent Modules.

The messages that are transmitted in an EIGRP routing domain are supported by RTP (Reliable Transport Protocol). This protocol requires that acknowledgement packets be sent for the various messages by the recipient of a particular message. The address used by this protocol to run is the EIGRP multicast address of 224.0.0.10.

The packet types in EIGRP are crucial in understanding how it exchanges routing information. It is important to note that there are 5 packet types that EIGRP uses to maintain adjacencies. Some of them are used in pairs as discussed below.

The EIGRP hello packet also has a hold timer, which is three times the length of the hello packet. if a router in an EIGRP routing domain does not respond to three hellos, it is usually considered as down. The reply to hellos means that the routes are still active.

NOTE: the hello packet is one of the best ways to diagnose EIGRP issues. The use of debugging commands can help establish where the problems occur in EIGRP.

In EIGRP, the update packets are used to send routing information to its neighbors. As we mentioned earlier, the routing updates that are sent by EIGRP are usually partial and bounded. This means that unless there is a topology change, the updates are not usually sent. When a topology change has been detected, the EIGRP update packets are either sent as a unicast to a single affected router or multicast to several affected routers in the routing domain.

The ACK packets are used to verify that updates or other types of messages were received. RTP ensures that ACK messages are delivered using Reliable delivery.

When routers configured with EIGRP boot up, the hello messages are usually sent to all the routers in the domain to form adjacencies, when the neighbors reply, they form neighbor relationships. The routers then send updates containing their information to the neighbors. When this is done, the routers draw up a topology table with all the best routes as well as alternative or backup paths. From this the best path is determined and used for packet forwarding.

NOTE: we will learn more on this when we discuss DUAL in more detail at a subsequent chapter.

Advantages and disadvantages of EIGRP

Some of the advantages of EIGRP are listed below.

The main disadvantage of EIGRP in the networking world is the fact that it is CISCO proprietary. This means that a network that may have router brands other than CISCO would not be able to run EIGRP.

In EIGRP, there are three tables we need to know about.

This contains all the directly connected routers in the same autonomous system that are running EIGRP. The formation of neighbor relationships is started by the hello packets.

The routing table shows the best route as calculated by DUAL and is used to forward packets in EIGRP.

We will explore more on these concepts further in the coming chapters.

Basic configuration and verification of EIGRP

Now that we have understood some of the concepts that make EIGRP work, it is time to do the basic configuration. 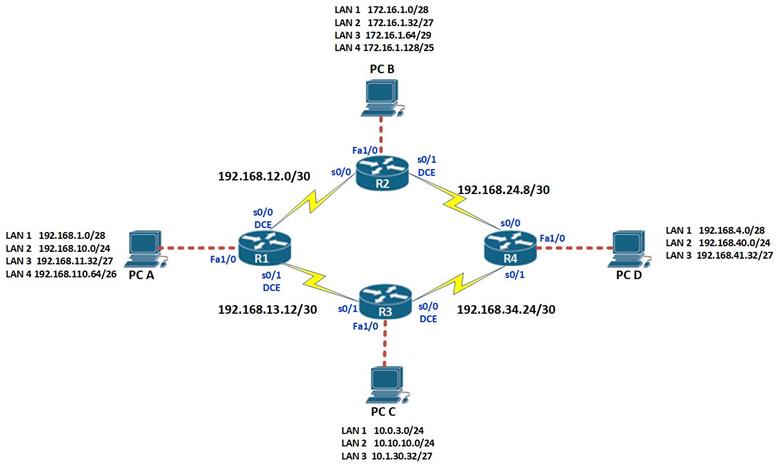 The topology that is shown consists of four routers and four host PCs. Each router has several routers connected to it. LAN 1 on each of the routers is the network segment for the PCs. The other LANs have been configured using loopback interfaces.

Please note that this will be the main topology used in EIGRP although some segments may change, this should be kept in mind.

The table below shows the ip addressing scheme used on this network. 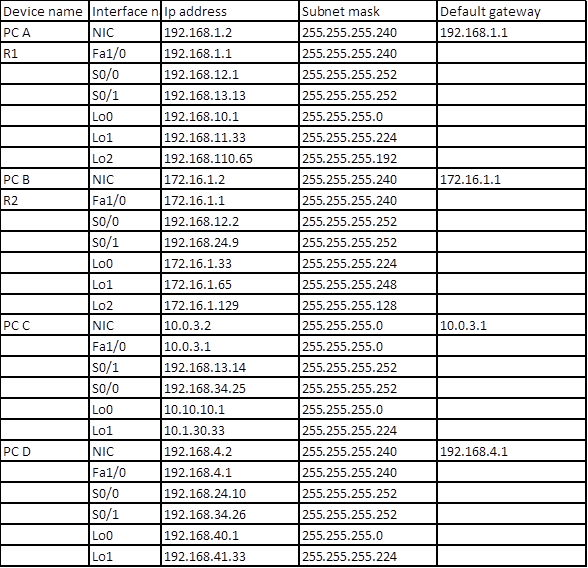 The first step will be the initial configuration on all the routers. We will not repeat these steps but you as a student and for practice you are expected to configure the following parameters on all the routers:

The first thing we need to understand is the autonomous system.

The autonomous system, is a way to identify all networks which are controlled or owned by a single entity and which may have the same policies. In EIGRP, the AS is always the same. A different name is the routing domain.

The process ID, is needed to identify the EIGRP process on the routing domain. If we needed several instances of EIGRP to run on 1 router, we would need different process IDs to identify each of them.

NOTE: the process id must match on all routers in the routing domain for EIGRP to work.

On all the routers, we need to go into the global configuration mode, and start the EIGRP routing protocol by entering the command:

This command is used to initiate EIGRP on a router. The process-ID, in EIGRP is a numeric value between 1 and 65536. And it identifies the EIGRP process as 1. This means that we can have several instances of EIGRP running on a router, however, communication will only work when the process_ID is the same in the routing domain. Therefore and EIGRP process 1 cannot communicate with and EIGRP process 2.

In our scenario, the process-ID we will use will be 100. And the command needed on R1 is as shown below.

This command should be entered on all the routers in this routing domain. When this command is executed, we will enter the specific configuration mode for EIGRP which is denoted by the prompt shown below.

Dynamic routing protocols work by advertising their directly connected networks. Therefore, on the routers, we need to advertise these networks using the command shown below.

The network should be the specific subnet that is being advertised. On R1 for example, we will advertise all the subnets that are directly connected to it.

NOTE: for this command to work effectively, it is usually best practice to execute it immediately after the router eigrp command.

In our scenario, the commands needed to configure EIGRP on all the routers successfully are shown in the table below. You should enter these commands carefully so as to avoid misconfiguration. 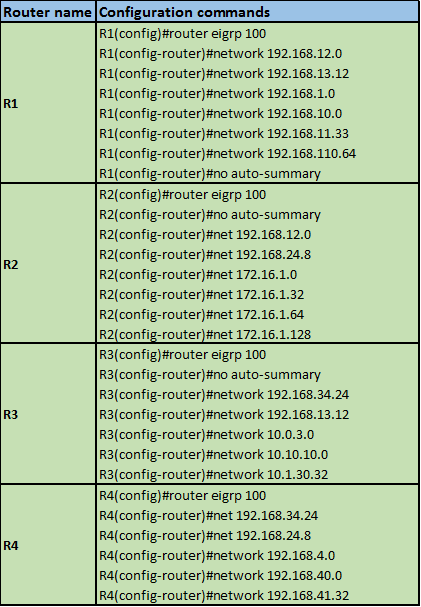 After this configuration, you should be able to see the following output on each of the routers. The figure below shows the output on router R1.

The diagrams below show the output of each of the above commands on router R1. 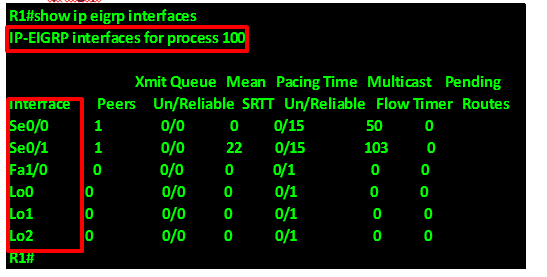 As you can see from the output above, highlighted in RED the process ID is shown as 100 and all the interfaces participating in EIGRP are also shown.

This command will be useful in verifying passive interfaces.

The table below shows the output of the show ip route on R1. 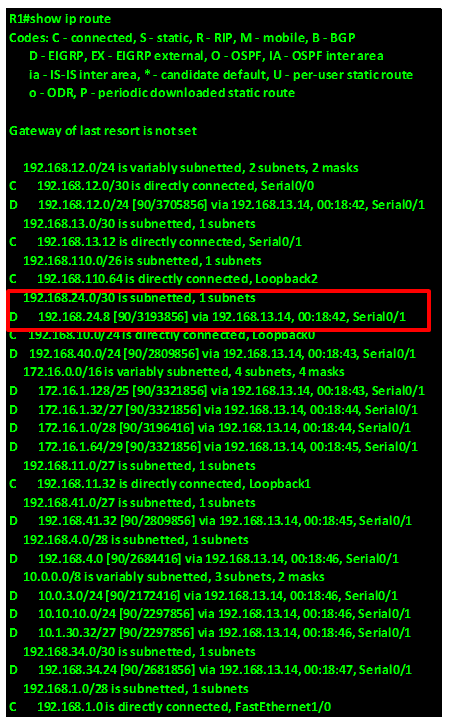 As you can see from the output above, R1 has all the routes to all networks in the network diagram.

The line highlighted in RED shows the routing protocol indicator as “D” which means EIGRP. 192.168.24.8 is the network that has been learnt and it has an EIGRP administrative distance of 90 and a metric of 3193856, this router learnt of this route from 192.168.13.14, which is R3 and this information was learnt via interface s0/1 which is the connection to R3.

This command will show all the routes that this router has learnt via EIGRP. This includes the main routes as well as the backup routes.

The successor and the FD will be discussed in the next part.

This command will show the directly connected routers that are participating in EIGRP.

As shown in the output above, R1 has 2 neighbors which it learnt of via interface se0/0 and se0/1. This command will be useful in discovery of routers that are not participating in EIGRP.

After this configuration, all the host PCs should be able to ping.

This marks the end of the EIGRP basic configuration, YES, it is as easy as that.

In this chapter, we have learnt about EIGRP, we have looked at the various key terminology used in EIGRP as well as some concepts. We have also done basic configuration of EIGRP. In the next part, we will continue looking at EIGRP, we will explore more concepts and do more EIGRP configurations.