In the previous chapters, we have been primarily focused on LAN technologies, however, as an enterprise grows, so does its networking needs. Consider company ABC, they formed in 2010 in New York, however, over the last couple of years they have grown rapidly and they now have three branches, one in Los Angeles, Miami and they recently diversified into London.

LANs would not be viable for communication over the four geographical information, and therefore there is need for WANs to be incorporated. In the next few chapters, we will look at the various WAN technologies that enterprises can use.

In this chapter, we will look at some of the concepts and technologies that are used in the WAN.

Definition of a WAN

A WAN network can be defined as a network that extends and operates over a larger geographical area as compared to a LAN.

Unlike LAN networks, which connect users and intermediary devices within a small area such as a building complex, WAN networks are large and they span over large geographical distances. The administration of the WAN is usually by the service provider and therefore for an enterprise to use the WAN, they have to pay.

The characteristics that mainly differentiate the WANs from the LANs are:

WANs and the OSI Model

The operation of the WAN is usually at the physical and the data link layers of the OSI model. The standards that are used usually describe how the signals are transmitted, and how the frames are addressed, encapsulated and given flow control.

At the physical layer, the WAN describes how electrical signals are transmitted, the types of cables, the speeds and the connections from the ISPs perspective.

At the data link layer, the encapsulation method, flow control, addressing of the frames are described.

There are several concepts that describe the operation of WANs at the physical layer. The diagram below shows some of the terms that are used in relation to WAN technologies. 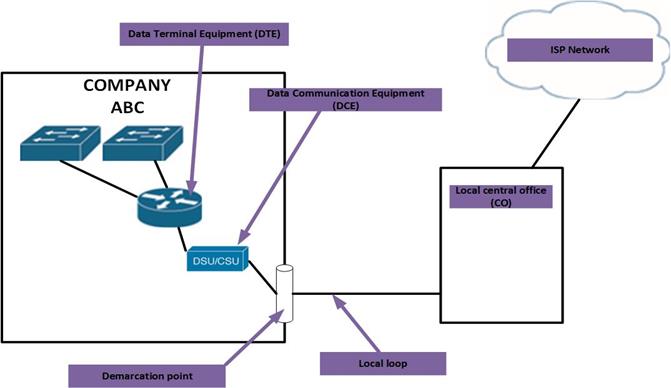 The physical layer standard used in the WAN are shown below. They describe how the DTE and DCE interact, the electrical standards, the cabling types as well as the connectors to be used.

In this type of connection, there is usually a dedicated circuit between the source and destination network, through the ISP. An example of this is when a person makes a telephone call. The dialed number is used to set switches in the exchanges along the route of the call so that there is a continuous circuit from the caller to the called party.

With this connection option, we have two ways to determine the type of link in use.

WAN technologies in use

There are several technologies that are employed in the WAN, in this course, however, you are not expected to configure them. Most of these technologies are covered in more advanced courses such as CCNP.

In as much as these technologies have not been discussed in this course, it would be wise to research them and know what they entail.