In the previous part, we looked at some of the concepts behind switch operation. In this chapter, we will continue with the configuration and verification of the basic switch configuration, configure and verify port security on a switch and learn some other important concepts.

As we mentioned in part 1 of this chapter, the duplex mode determines whether communication will be unidirectional or bidirectional. By defaults, the duplex on CISCO switches is usually auto. This means that if one side is operating on half-duplex, then the port would be in half-duplex as well.

We can hard code the ports on the switch to use only full duplex since it is the preferred mode. The commands needed are implemented in the interface configuration mode on a switch as shown below.

There are several security breaches that switches are vulnerable to. In this course however, you are only expected to understand some basic security options such as port security.

There are several attacks that switches are vulnerable to such as:

MAC address flooding – in this type of attack, an attacker usually gains access to a switch using a node. They then use a tool to send invalid source MAC addresses to the switch. Switch operation works by adding the MAC address to the mac-address-table which is limited to a certain number of MAC-addresses. When this database is filled up, the switch is unable to forward traffic using unicast and it begins to operate like a hub by flooding frames out of the ports. This means that the attacker can see all the frames for the nodes in the network.

MAC-address spoofing – in this attack, an attacker poses as a DHCP server, when legitimate clients request for addresses from the DHCP server, the attacker responds with an address that would permit them to see the traffic from a particular node.

Other common attacks may be aimed at CDP, telnet or other technology weaknesses that may be manipulated through the switch.

Using port security is one way to protect the switch against such attacks. All switch ports or interfaces should be secured before the switch is deployed. Port security limits the number of valid MAC addresses allowed on a port.

Port security is one way of securing a CISCO switch. Configuration options using port security can secure the switch in the following ways.

In this case we will be using a modified topology to configure port security. The topology shown below consists of 1 switch and three host nodes. PC A, PC B and PC C. we have connected only PC A and PC B to the switch and we will use PC C as the test for security. 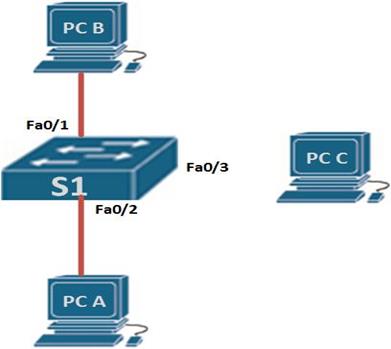 When configuring port security, there are several Security Violation Modes that are used to protect the switchports.

The security violations determine the action to be taken if access on a port does not meet certain criteria.

The violations apply when the maximum number of user nodes that can access a port is reached, when a particular MAC address that has not been learnt dynamically or statically tries to access the switch or other criteria that may be configured according to the security policies in place in an organization.

The violations that can be triggered due to these events include:

To configure the secure ports as we have mentioned above, follow the steps shown below.

Step 2: in the interface mode, enter the following commands to activate port security and then enable the protect violation mode:

Step 3. We need to bind the mac address of PC A to port fa0/1 such that if another node is connected to this port, the interface will deny this port from transmitting. To do this, we will configure the port with a static mac address of PC A. as shown below.

Step 4: is the final step is to specify the number of MAC addresses that can access this port. In our case we will specify only one so that if any other device tries to access this port, the port will be protected.

To configure port security violation restrict and shutdown, the commands are shown below.

It is recommended that you should also configure the maximum number of mac addresses on a port so that no one can use other devices such as hubs.

Now that we have configured port security on the two ports, we need to verify their operation.

The command show port-security <int type and number>, shows the protection status on a port. The output of this command for port fa0/2 is shown below. 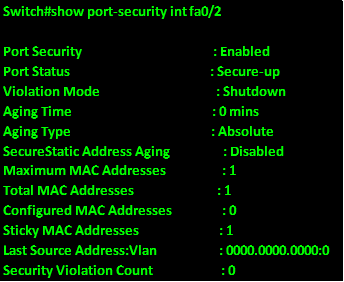 As you can see from the output above the port security is enabled and the port is shown as secure. The violation status is shutdown and there is one sticky mac address that has been learnt by this interface.

To see whether this security will work, we will connect PC_C to this interface and view the output of this command. The output is shown below. 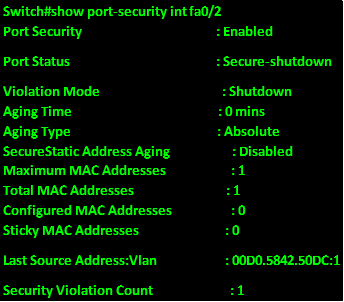 As you can see from the output above, the violation count moved from 0 to 1 and the port status is shown as “secure-shutdown” meaning that it has been deactivated till an administrator intervenes.

With this configuration, we have finished the security configuration options that we need to configure on our switches. In the next section, we will look at the various verification and troubleshooting commands that you need to know when configuring a switch.

There are several commands that can be used to verify the operation of a switch as well as to troubleshoot when there is a problem. Some of these commands we will discuss later as we continue with switching but some of the basic ones are shown below.

Just like on routers this command will show the configuration that is currently in use on the switch. The output of this command on S1 is shown below.

This command will show all the mac addresses that the switch knows about. It can be useful when you want to verify whether the switchports have nodes on them. Since we have configured only 2 ports on our switch, the mac address table will only have 1 entry with the mac addresses of the two PCA since the port attached to PC 3 as we configured was shutdown due to a violation, this is as shown below.

This command will show various statistics for the switchport. More of this will be discussed in later chapters. 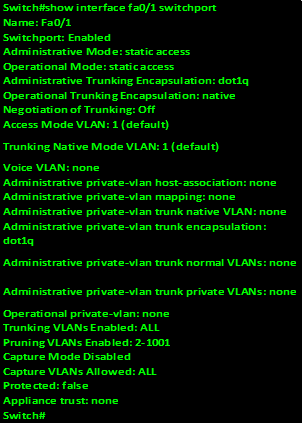 In this chapter, we have looked at the various configuration options for security on switch ports, we have also looked at various verification commands. In the next chapter, we will look at VLANS. This chapter is supposed to introduce you to the concepts behind switch operation, as well as basic switch configuration.

The concepts in this chapter are an integral part of the ICND 1, ICND 2 and CCNA composite exams. In the next chapter, we will look at a topic that is at the heart of switch operation which is VLANs.