VLANs are a way in which we can divide the switch into smaller broadcast domains and therefore make it possible to implement many subnets on one switch.

Consider the scenario shown below.

In this scenario, company XYZ has two departments; finance and sales. Each department has users located in both buildings at the same time each department is supposed to be on its own LAN segment, so as to separate the traffic between the FINANCE and SALES department. Typically, users on a switch are on 1 subnet which is a big problem. We therefore need a way to separate these departments which raises the question as to how to implement this solution. If a router is placed in between the buildings, we would require more than two Ethernet segments. And one switch would not be enough since these departments are on different subnets.

In this case, we can implement VLANs on a switch located between the two buildings. The users in each of the departments can then be assigned their own subnet.

This is one of the most significant uses of VLANs. As we continue with this chapter, we will elaborate on how VLANs are used in different scenarios depending on the challenges faced.

The use of VLANs is very important in today’s networks. To appreciate VLANs, we need to consider why they are important.

In normal operation, when a switch receives a broadcast frame on one of its ports, it forwards the frame out all other ports on the switch. Take the scenario shown below.

If PC 1 wants to send a message to PC 6 on switch B, the frame would be broadcast to all the users connected to switch A and switch B. however, if we had VLANs as shown in the scenario below, the frames would only be broadcast on their respective VLAN.

NOTE: VLANs divide the switch into logical groups on different subnets. The interconnection between two switches is usually a TRUNK port.

When using VLANs on several switches, the interconnection the switches is usually a trunk. If we use an analogy of a highway, the trunk line can be likened to a highway which interconnects many small roads. The trunk link allows traffic from many VLANs to move between the switches.

The two types of trunk links that can be configured on CISCO switches are the ISL trunk and the IEEE 802.1Q trunk ports.

There are several concepts that you should know when it comes to configuring trunk ports, these are:

DTP is a CISCO proprietary protocol that negotiates the trunking modes between switches. As we mentioned earlier, the port between the two switches A and B, is a trunk port, therefore it carries traffic from all VLANs across the two switches.

There are three modes in which ports on a cisco switch can operate:

An access port is a port that connects to an end device such as a computer or an IP phone.

A trunk port carries tagged and untagged traffic across switches and sometimes to a router.

DTP works by negotiating the operation mode of a port on CISCO switches. If one side is configured as a trunk, then DTP can determine the mode of operation on the other end of the connection.

These concepts and more will be discussed as we continue with the configuration of VLANs.

In this section, we will configure VLANs based. The topology below consists of one switch and 3 nodes. Our task is to configure VLANs on this switch while keeping in mind that we might need to add another switch. 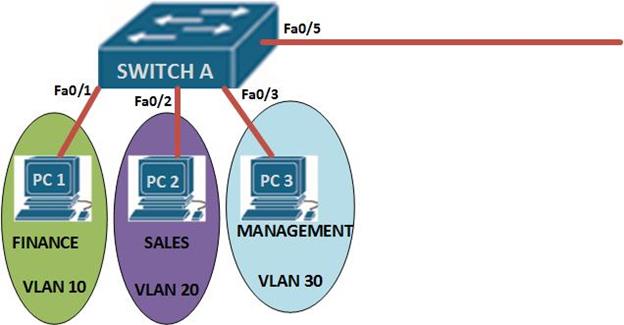 We will not configure the PC’s since we will not be testing communication between the PC’s.

In this topology, we are expected to configure the following:

The first part which is the basic configuration is shown below.

In the previous chapter, we learnt how to configure the switch’s basic operation. The commands shown below are a review of these concepts. 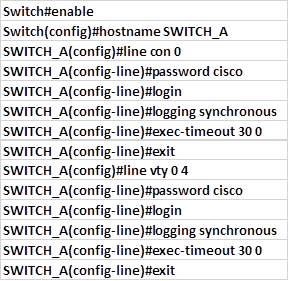 Part 2 is the configuration of the VLANs. In this scenario we have three VLANs i.e

To configure the VLANs go to the global configuration mode and type in the command:

the VLAN number is a unique number from 1 to 1005, however there are reserved VLANs which we will discuss later.

After executing this command, we will be taken into the VLAN configuration mode denoted by prompt:

in this mode we can name the VLAN as we have been instructed. In our scenario, the configuration commands needed to configure all the three VLANs are shown below. 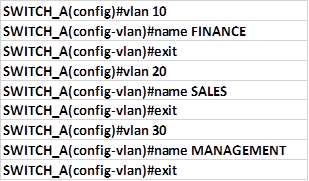 Assign ports to the VLANs

Next we need to assign the ports on the switch to the VLANs we have configured. To do this we need to enter the interface configuration mode and follow the steps shown below.

The command: switchport mode <access> specifies that this port is an access port and therefore it can only support traffic from 1 VLAN.

The second command: switchport <access> <vlan 10> specifies that the node connected to this port can only access VLAN 10, therefore the ip subnet for this port should be the same for all nodes on VLAN 10.

The commands needed to assign the switchports connected to the three PCs to their VLANs are shown below. 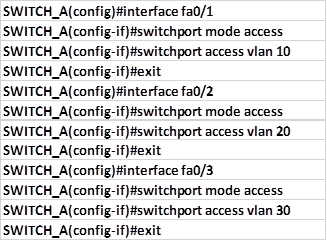 Now that we have assigned the ports to their respective VLANs, we need to configure port security for the three ports.

All three host ports, will use dynamically learnt mac-addresses, we will use a maximum of one MAC address per port, and configure the violation mode as shutdown. These commands are shown below. 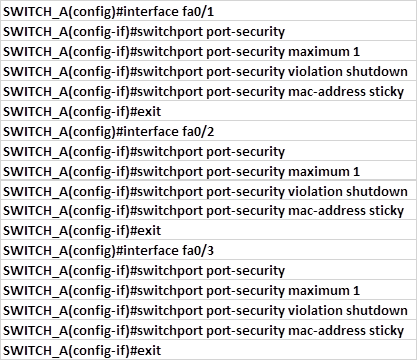 To configure this port as a trunk port the commands needed are:

The command: switchport trunk native vlan 1, specifies that the native VLAN on this switch is VLAN 1.

NOTE: it is advisable to configure the native VLAN using an ID other than the default which is VLAN 1 for security purposes.

This is the last configuration command we use in this scenario. In part 2 of this chapter, we will learn how to verify VLANs operation, delete VLANs and troubleshoot common VLAN problems such as native VLAN mismatches.