In the previous chapter, we looked at the network layer and its involvement in communication. in this chapter, we will look at ipv4 addressing. This is one of the most important concepts in networking and will be critical in your overall success in networking. Understanding this chapter is critical to the rest of your studies. This chapter is divided into two parts so that it can better understood. In the first part, we will look at binary vs decimal, then we will be introduced to subnetting. Then we will finish up by subnetting a few addresses.

We are used to decimals. The number systems used everywhere today is mostly binary. Base of 10.

This is what we use in day to day activities. However, computers are limited to only 2 digits. “1” and “0”, which represent “ON” and “OFF”. The ip addressing system we use is based on this concept. All ipv4 addresses that we use are a decimal representation of the binary form that the computer knows about.

The table below shows the difference between decimal and binary connotations.

You will be seeing the binary table more frequently as we continue in this chapter and others.

How networks are addressed

I believe the most of you have seen an ip address. The ip addressing scheme used contains two parts.

The number of bits in each side either the network portion or the hosts portion determine the number of networks and hosts respectively.

To understand how networks work, we need to understand binary to decimal and decimal to binary conversion.

Take 192.168.1.0 as the ip address example. We need to convert this to binary. The figure shown below shows how this is done.

The figure below shows how this can be done.

Keep these steps in mind:

NOTE: you need to practice converting decimal form addresses to binary form for you to understand IPv4 addressing, therefore, practice is vital.

Now that we have learnt this concept, the table below shows a way you can convert each number into binary easily.

Based on this table, you can convert any number to binary or decimal easily.

For example, if we want to convert 255 to binary, we would take the following steps.

is 1 larger or equal to 1, yes. This is the last step of the process.

This can be summarized in the flowchart shown below. 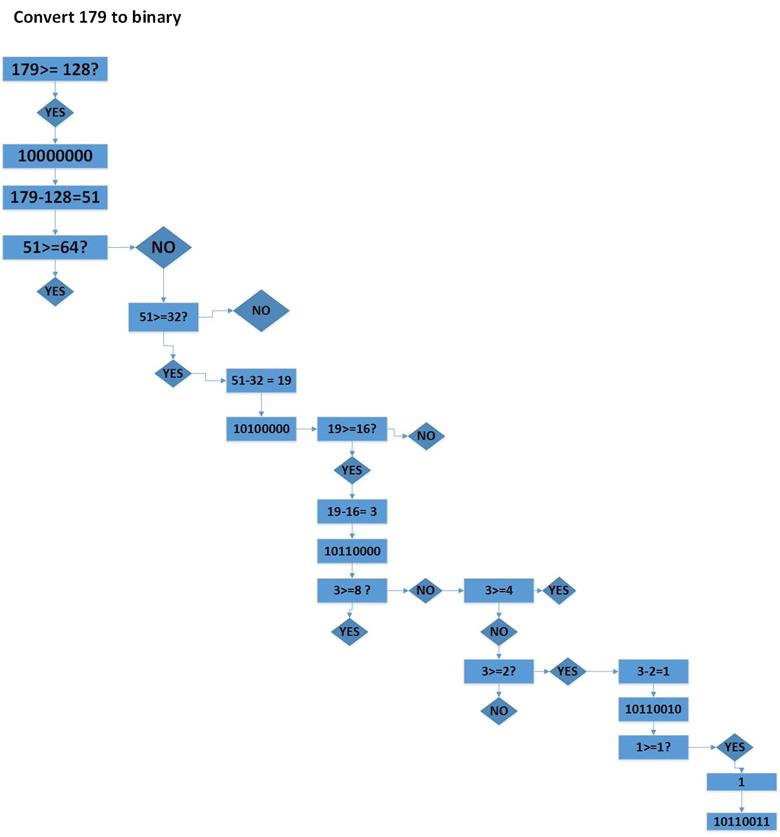 Now if a number from the example above is larger or equal to the binary equivalent, the binary number will be 1, if it is less than that then the binary will be 0.

Now based on these two forms, can you convert the following to binary?

These sequential steps will be useful in knowing how to subnet.

Because our representation of addresses is limited to decimal values for a single octet, we will only examine the process of converting 8-bit binary to the decimal values of 0 to 255.

In any IPv4 network address range, we have 3 main types of addresses:

The network address is the name we give to a network, for example a network with the address shown below is known as “the 10.0.0.0” network. All hosts in this network belong to the 10.0.0.0 network. The network portion for these hosts would all be the same.

In networking the first IPv4 address in a network is usually the network address.

The last address in any network will always be the broadcast address.

NOTE: you cannot assign the network and broadcast address to a host and these are reserved.

The number of hosts on the network or the number of network bits determine the prefix number to be used.

The formula to get the number of hosts per prefix is

2^n-2= host addresses, where n is the number of host bits.

From the above formula, the hosts in this network will be:

Therefore there will be 14 host IP addresses.

When we configure the IP address on the network devices, it must be accompanied by the subnet mask.

So the question is, how does the router know to which network an ip address from a packet it just received belongs to, when making it’s forwarding decision?

ANDing is a logic operation, the ANDing process is used to compute the network address, given the subnet mask and an IP address. The Logical ANDing operation gives the following results when the comparison is made on an IP address and subnet mask bits.

The reasons for binary ANDing are:

You should learn binary ANDing by practicing. The ip addresses shown below would be a good place to start.

Do you think you can determine the network addresses of the following ip addresses?

So now that we understand how to convert ip addresses from decimal to binary, it is time to introduce subnetting.

Subnetting allows us to create more networks from a single ip address block. These networks are interconnected using routers and therefore each interface on a router has to be on a different network.

NOTE: the networks we will create through subnetting will be referred to as subnets. Therefore you should not get confused when you see the word subnet instead of network.

Subnetting is a simple process where we borrow bits from the host portion in order to create new networks. Take the example shown in the figure below. The address 192.168.1.0/24 is the major class, if we were to borrow 2 bits from the hosts portion, the new prefix length would be 26. Therefore, the 2 bits would be assigned to the network portion.

When we borrow the host bits, the new binary address would be the same, however, the subnet mask which shows the network portion will be different as shown below:

The formula for calculating how many subnets are created whenever we borrow host bits is:

To calculate the number of hosts per network, we use the formula of

Take the example shown below of network 172.16.1.0/24, if we want to subnet this network to give 2 networks we would need to borrow 1 host bits from the host side and add them to the network portion.

After borrowing the two host bits from the fourth octet, the new network will be as shown below.

The subnet mask would have 1 more 1 bits.

Therefore after borrowing 1 host bits we will have created 2 more networks but we will have decreased the number of hosts.

Now the new subnets would be as shown below

NOTE: whenever we subnet, the last subnet will always have the same bits as the last octet of the new subnet mask.

Take the example shown below.

Step 1. How many bits do we need to borrow from the hosts segment?

The first 2 and the last subnets will be:

The increment number is usually the last borrowed host bit. In the above scenario, this is 32. 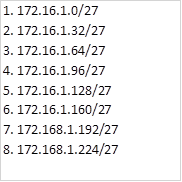 In our networks, the IP address requirements may vary. We may need few ip addresses for connections such as point-to-point, we may have a department that has 200 users while another only has 20.

Subnetting allows us to divide the networks so as to optimally use the ip addresses. If we assigned 200 ip addresses to a network that only needs 20, we would be wasting very many addresses.

If we use an analogy of a telephone service provider, not subnetting would be like giving a customer 100 telephone numbers whilst they only require 1.

When subnetting, we should carefully consider expansion plans since our networks may grow due to demand.

In the scenario shown below, we will subnet based on the number of HOSTS. This is a crucial element in understanding subnetting.

In the scenario below, we are expected to subnet three network addresses:

So we will begin with the WAN links.

For such a link we need only 2 ip addresses per link, therefore, we need to ask which as which subnet mask will allow for only 2 host addresses.

We need to calculate how many right hand side bits we need, then the rest will be allocated to the network portion.

Therefore, we only need 2 host bits. 6 bits will be in the network portion.

The new subnet mask after we add 6 bits to the network portion will be:

These will provide enough host ip addresses for the WAN links.

For part 2 we need to provide enough host ip addresses for LAN A.

Therefore, we need to calculate how many host bits we need to accommodate this.

The host bits will be 6 and we will borrow 2 host bits to get these new networks.

The increment number will be 64, therefore the four networks will be:

First, we need to determine how many host bits will be needed in the hosts portion.

Therefore, the hosts portion will have 7 bits and the network portion will borrow 1 bit from the fourth octet.

Therefore, the increment will be 128.

First we determine how many host ip address bits will be needed.

Therefore, the host portion will have 4 bits, while the network segment will borrow 4 bits.

The increment in this network will be 16.

This marks the end of the first part of ipv4 addressing. In part 2 we will delve deeper into subnetting and also explore other concepts such as suppernetting.