In the previous chapter, we saw how DHCP is useful in assigning ip addresses to hosts in a network. In this chapter, we will look at another important ip service that helps hosts access the internet. We will learn about, NAT operation and IPv4, and configure and troubleshoot NAT.

In previous topics, we learnt about IPv4 addressing and how we can address network devices. We also learnt that there are different types of IPv4 addresses: such as the RFC 1918 addresses.

The table below shows the ranges of private addresses as defined by RFC 1918:

These IPv4 addresses are reserved for private network communication and cannot be used to communicate on the internet.

NAT (Network Address Translation) is our solution to the internet connectivity problem. With NAT, an enterprise can use a few number of public IPv4 addresses to access the internet even if they have many hosts who have been assigned private IPv4 addresses.

Take the analogy of an office receptionist. In company ABC, we have 10 employees, including the secretary. Each employee has a desk and a phone that serves in internal communication between employees, this phone system is routed through a PBX system. The receptionist has a phone line that is used to communicate with different people externally.

However, in this scenario, there are times an employee may want to make a call to a client or a partner organization, for this, the call is routed through the receptionist’s desk and forwarded. It is highly unlikely that all the employees will want to make external calls and therefore this solution is efficient and it saves the company money.

NAT, works like the receptionist. The figure below shows NAT operation. 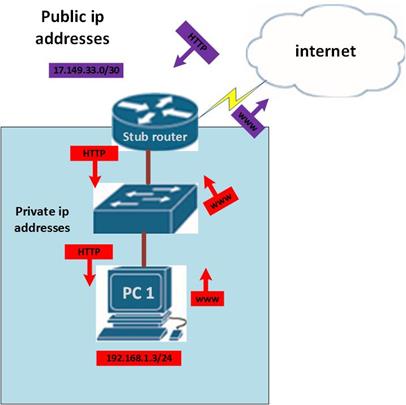 In this scenario, there are two networks that are connected by the stub router.

The network in which PC 1 is in is a stub network and devices in this network can only access outside resources using the stub router.

When PC 1 wants to access a website, – shown by the red arrow, it sends the packet to the stub router. When the router receives this packet, NAT translates it to a form that can be routed to the internet – shown by a magenta arrow. The packet is then forwarded to the internet.

When the reply comes back, NAT on the stub router, NAT knows where the packet came from and it forwards it to PC 1.

NOTE: NAT works by translating the RFC 1918 private IPv4 addresses we use in our internal networks into public IPv4 addresses that can be routed over the internet. This also enhances security because users in external public networks cannot access information on private networks, however, this does not mean that NAT is a replacement for firewalls.

The figure shown below demonstrates the terminologies used when we configure NAT. in this scenario, R1 is configured for NAT. this means that it has public IPv4 addresses that it can give to PC1 and other hosts for accessing the internet.

Inside local address – these are the private IPv4 addresses as defined by RFC 1918 that are used to address hosts in the private networks.

Outside local address – this is similar to the outside global addresses and they are local IP addresses configured on any external network.

There are two types of NAT translation: dynamic and static.

In NAT overload, the router usually maintains different TCP/IP sessions and assigns a port to each of the devices that are connected to it. In this case, when addresses are translated, they are given the same public IPv4 address but with a different port that identifies the source device. When the router gets the reply from the internet, it matches each conversation to the correct device using the port number.

The diagram below shows how this works.

From the figure, PC 1 and PC 2 both want to use the internet, PC 1 has a HTTP message, for the ip address 100.89.33.61, while PC 2 sends a message to the HTTPS server located on 32.156.1.3, when the router receives these messages, NAT adds the source port information so that it can distinguish the communication streams from the two PCs. The two packets are then given the same global ip address and tagged with the port number.

When the reply is sent by the HTTP and HTTPS servers, they retain the port information. Once the message is received by R1, it knows the destination of each packet based on the port that the packet is addressed to.

Some of the benefits of NAT include:

Although NAT is beneficial and is responsible for the survival of IPv4, there are some drawbacks.

However, NAT does have some drawbacks.

With Static NAT, external devices can initiate communication to internal network or inside local addresses. For example, if you had a web server in your internal network, static NAT would allow hosts located on the internet to access web resources on your web server by allowing mapping of the web server’s internal IPv4 address to a public IPv4 address permanently.

For example, in the scenario shown below, the web server is located in our local network. Users in external networks may want to access websites that are on this web server. Static NAT would be used in this case.

The commands needed to accomplish this are shown below.

This is shown below.

The commands “show ip nat statistics” and “show ip nat translation”, will show the specific NAT Statistics and translation that have occurred for the configured NAT mapping. The output of these two commands is shown below. 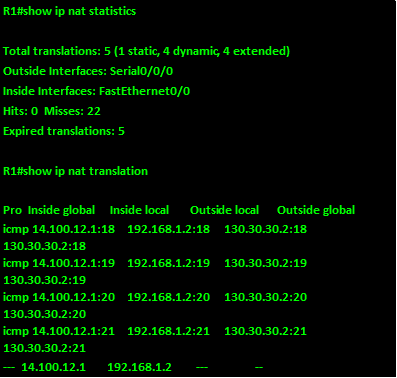 In dynamic NAT, we need to specify which IP addresses should be translated using an ACL. In the scenario shown below, we are supposed to translate only the network A connected to PC 1 and ignore network B.

The steps involved in dynamic NAT configuration include:

The nat pool is created with the command “Ip nat pool” the structure of this command is shown below followed by the command used on our internet gateway router.

This access list will specify the ip addresses in the internal networks that should be translated by NAT.

This command is used to bind the access list that we just created to the NAT pool. The command structure is shown below.

On our router this is shown below.

Step 4. Apply NAT to the inside and outside interfaces.

These commands are used to specify the inside and outside interfaces.

NOTE: configuring NAT is one of the most important aspects in CCNA simulation exams as well as in real world examinations so you should practice NAT often so as to fully understand it. It would be wise to have an internet connection in the lab and use of real devices.

As you may have noticed, in the above scenario, we have used a NAT pool that consists of many ip addresses. However, the ISP may not always give you a range of ip addresses. Therefore you may need to configure NAT overload.

The configuration commands needed to configure NAT overload are almost similar and as such we have shown the different commands that are used to specify overload.

The command that is used to define the NAT pool may only consist a few ip addresses or even 1, therefore you may leave out the netmask command. As shown below.

The above example shows a NAT pool named NAT_OVERLOAD that has only 4 public ip addresses.

The final step in configuring NAT overload is when you bind the access list to the NAT pool, in this scenario, you will have to add the “overload” keyword at the end of the command as shown below.

NOTE: You should be very careful when configuring NAT overload. And following this guide as well as more labs will help.

It is important to verify NAT operation. There are several useful router commands to view and clear NAT translations.

In the output shown below, the number of NAT translation is shown. In our scenario, NAT has translated four inside local addresses to outside global addresses. This command can be used to verify the operation of NAT by confirming whether NAT is actually mapping private IPv4 addresses to public IPv4 addresses.

As you can see from the output above, the inside local addresses are being translated to outside local ip addresses that can traverse the internet.

This command can be useful when you want to verify that the NAT configuration is working and inside local ip addresses are being translated. 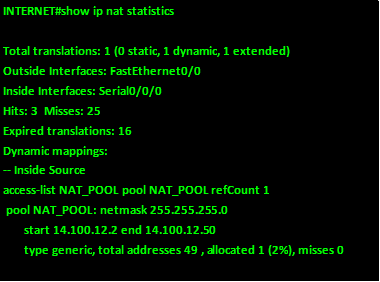 In some cases, you may have trouble connecting to the internet from your internal network. This may be as a result of problems with NAT. therefore, the troubleshooting of NAT is usually very critical to restoring internet connectivity in our networks. as such, the steps shown below are used to troubleshoot and verify NAT operation towards restoring internet connectivity or ruling it out as the cause of the problem.

Step 1. Identify and define the purpose of NAT in your network. This is meant to review whether NAT accomplishes the tasks it has been configured for.

Step 2. Verification of NAT translations can help identify if the correct IPv4 inside local addresses are being translated into global addresses.

Step 3. Clear the NAT process and used the debug ip nat command to see if the problems are fixed.

Step 4. This step entails verification of the translations that are occurring on a router actively by using the “debug ip nat” command. 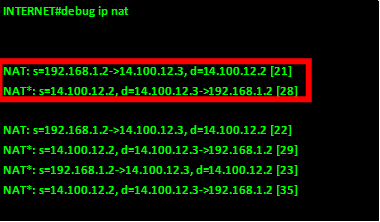 The meaning of the various status messages and values is shown below.

NOTE: troubleshooting NAT is an important element in figuring out whether the internet connection is working. Following these steps will help you successfully verify and troubleshoot NAT. however, always turn off debugging when you are done troubleshooting since debug commands may use up the router’s resources unnecessarily.

In this chapter, we have looked at the role of NAT in the network. We have discussed the private and public IPv4 addresses and we saw that private IPv4 addresses cannot be used in the internet. Then we discussed what NAT is and looked at the various terminology. We then looked at the ways we can Implement NAT and configured static and dynamic NAT. we finished off with the verification and troubleshooting of NAT.

In the next chapter, we will look at other ip services and cisco IOS services that are important in the network. We will consider the role of high availability in hosts by discussing VRRP, HSRP and GLBP, we will then look at syslog, NTP, and CDP.