In part 1 of this topic on STP, we looked at the STP concepts and discussed how STP helps in redundancy and loop prevention in LAN networks, in this second part, we will configure STP and as well as troubleshoot STP.

By default STP is on by default on CISCO switches, however, we will configure some of the other options in STP. The topology we will use in this configuration is shown below. 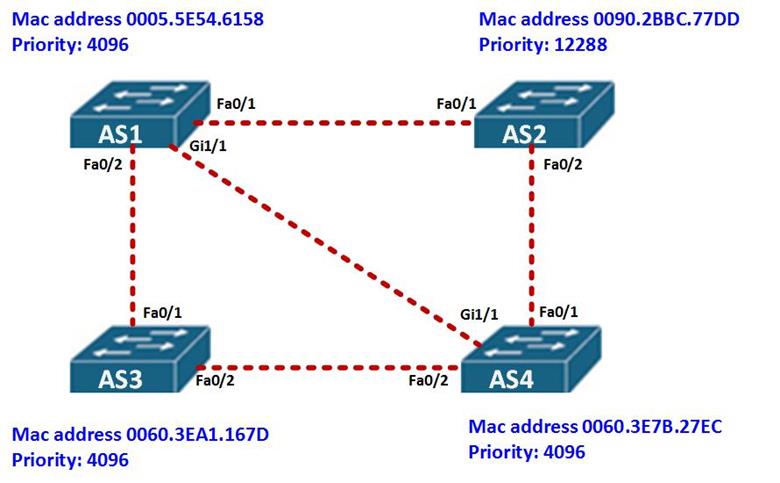 Configure and Verify the BID options

NOTE: by default the spanning tree priority is 32778

In our case we will use the priority command on all the switches and the commands used are shown below.

These commands will change the priorities of all normal VLANs on the four switches to the configured value.

The CISCO portfast technology was discussed in part 1 of this chapter, to configure portfast on access ports, enter the following command in the access ports on a switch:

When this command is executed, the access ports will transition immediately from blocking to forwarding state and no BPDUs will be sent to these interfaces.

We need to verify the operation of STP on the switches. For this we will use the commands shown below.

The output of this command will show the active STP instances on a switch as shown below.

Some of the statistics include the type of STP, in this case it is 802.1D which is the open STP standard, the VLANs which have STP, the port roles and the priority, and you can also verify the bridge ID.

Will tell you most of the spanning tree statistics that you need to know to determine the root bridge and the other switch roles. This is shown below. 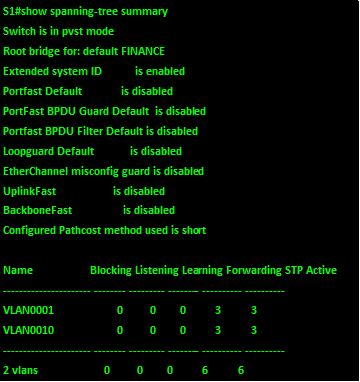 The other verification commands can be used to operate the operation of STP.

NOTE: other verification and troubleshooting commands will be discussed in more detail in advanced courses such as CCNP, however, you are supposed to understand the commands discussed above well.

So far we have learnt about the 802.1d implementation of STP. In this section we will learn about other variants of STP such as RSTP, PVST+ and others, some of these are CISCO proprietary while others are open standards defined by IEEE. The table below shows the various STP implementation variants. 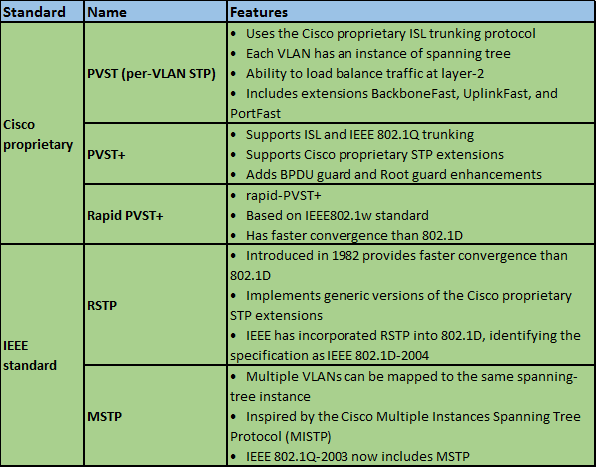 In this course, we will mostly focus on the PVST variations and RSTP. These concepts will be discussed in detail in the last part of this chapter on STP.